For the benefit of our REALTORS® and clients, we further categorized the Kootenay area into neighbourhoods. These sub areas are determined by the various municipalities, population density, and zoning bylaws.

Tucked away in Southeast BC, the Kootenays are a quiet oasis full of charming towns, villages and small cities. If you’re looking to get away from big urban centres and enjoy year-round outdoor adventures, one of the many neighbourhoods in the area could be the perfect place to call home. 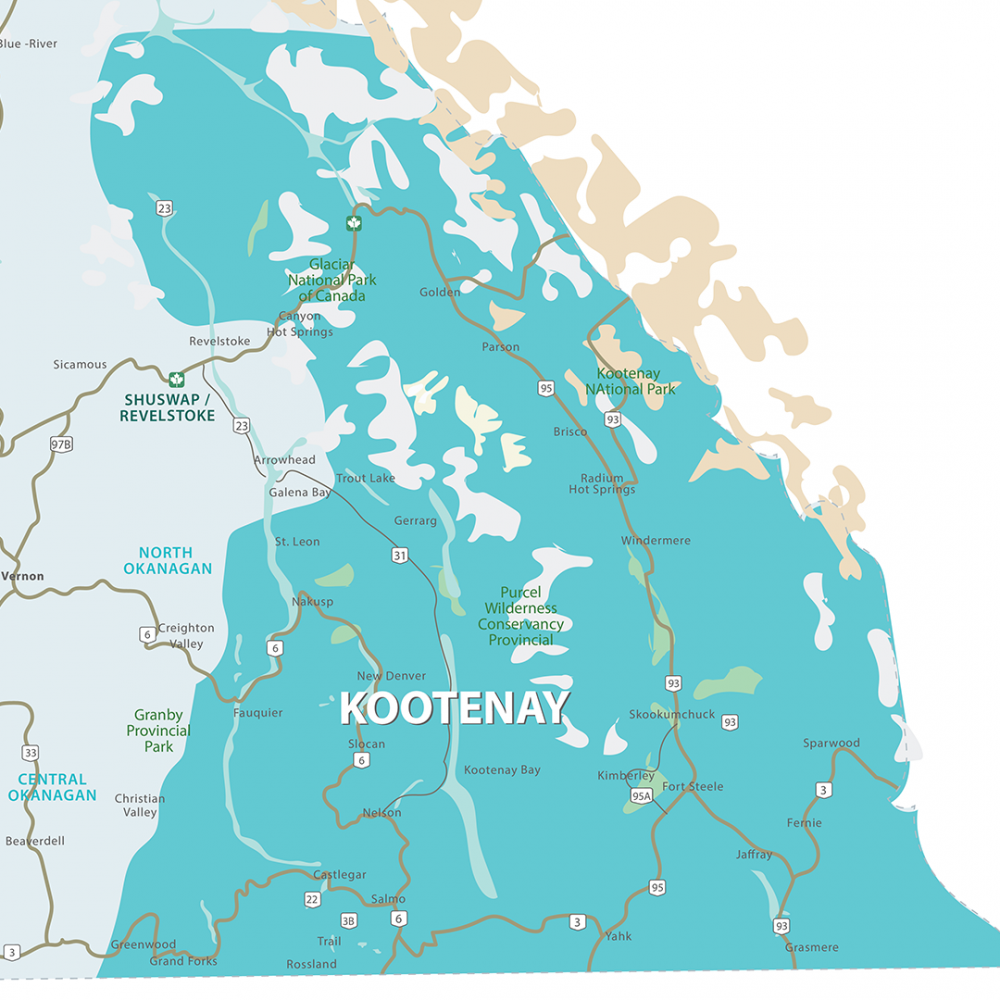 The Village of Canal Flats is a remote villa located in the Columbia Valley along the Kootenay River, just under an hour north of Cranbrook.

Nestled among several mountains, there is ample opportunity for residents to ski, hike, and enjoy the hot summers and snowy winters of the Kootenay region. Due to its remote nature and distance from advanced medical services, access to a vehicle is ideal for those living in Canal Flats.

Located in the middle of the West Kootenays, about 2.5 hours west of Cranbrook and 3 hours east of Osoyoos, the City of Castlegar marks the space where the Columbia and Kootenay Rivers meet.

There are many businesses and services available inside the city, including healthcare, education, and shopping essentials.

The largest urban centre in the East Kootenays, Cranbrook combines the best of small town and city life. The city has all major essentials in terms of shopping, education and healthcare, and is about a 3.5 hour drive from Lethbridge, AB.

Cranbrook offers plenty of opportunities for recreation, including an aqua centre, arena, and access to many nearby parks and mountains.

The town of Creston is located just 15 minutes from the BC/US border and 15 minutes south of the renowned Kootenay Lake. Despite a bit of a colder, rainier climate, Creston allows residents to enjoy outdoor activities year round such as hiking, water sports and backcountry skiing.

The District of Elkford is a high-altitude Rocky Mountain municipality in the East Kootenays. It is surrounded by first class hiking trails and mountains.

While most basic essential services can be accessed in Elkford, the nearest hospital equipped for emergency services is a 30 minute drive in Sparwood.

Located in the Rocky Mountains, the City of Fernie is ideally situated for winter and summer activities including skiing, hiking, and biking. The city acts as a hub for nearby Rocky Mountain towns, with access to shopping, health/emergency, and education services.

Fruitvale is a small village located in the West Kootenays just a 10-15 drive away from the bigger centre of Trail, where you can find all essential services and shopping including the Trail Regional airport and the Kootenay Boundary Regional Hospital.

There are several shops, parks and walking trails in Fruitvale itself, but having a vehicle to drive to nearby towns is recommended for those living in this neighbourhood.

About an hour west of Banff, Golden is a Northern BC town surrounded by six national parks; Yoho, Glacier, Banff, Jasper, Kootenay and Mount Revelstoke.

With a variety of local shops, grocery stores, and a district hospital, the Town of Golden has most services and necessities covered within its borders

With its central location in between the Okanagan Valley and the Kootenays, the City of Grand Forks acts as the hub of the Boundary area. It is located only a 1 hour drive from Castlegar, which has a regional airport and other amenities, and a 2.5 hour drive from Kelowna, a major urban centre with an international airport and access to essential and advanced services and shops.

Canada’s smallest city, the City of Greenwood is located in the southern part of the West Kootenays, just over two hours away from Kelowna.

It is a quiet area with access to many trailheads, parks, lakes, and a ski hill. While there are essential shops and services in town, it is ideal for residents to have a vehicle to access more advanced services in neighboring towns and cities.

On Windermere Lake, in between the Purcells and the Rocky Mountains in the Columbia Valley, the District of Invermere experiences a warmer climate and is well situated for year round outdoor activities.

Invermere is about 1.5 hours north of Cranbrook, surrounded by mountains, close to hot springs, and a short distance from two different mountain ski resorts.

Kaslo is a small town located along the Kootenay Lake, surrounded by several different mountain ranges and the Kaslo River. It is quiet and offers many opportunities for outdoor recreation.

The village has a few essential shops and a small airport, but residents should be prepared to travel out of town for advanced shopping and services.

Kimberly is a small city situated along Highway 95A between the Purcell and Rocky Mountains in southeastern British Columbia. Named in 1896 after the Kimberly mine in South Africa, the town’s 100 year rich mining history remains a cultural staple for tourists and residents alike.

Home to an abundance of down-to-earth mountain folk, Kimberly offers unique experiences spread across all four seasons. With a vertical drop of 751m and a summit elevation of 1,982m above sea level, Kimberly’s North Star hill offers a wealth of ski and snowboarding opportunities in the winter, and hiking opportunities year-round.

The Village of Midway is found in the West Kootenay region of south central British Columbia. With its name thought to be derived from its location midway between the Pacific Ocean and the Rocky Mountains, this small village is steeped in railroad, forestry, mining, ranching, and Indigenous history.

Centered between the Kettle River and the Crowsnest Highway, Midway’s downtown offers a robust sense of community and is ideally located for travel to and from neighboring towns such as Greenwood.

With a population of 996, the Village of Montrose is a gateway to the Beaver Valley. Situated 11km east of downtown Trail and 5 km west of Fruitvale along Highway 3B, Montrose preserves its quaint small-town appearance while having access to big city retailers such as Walmart just a short drive down the road.

Best known for its excellent drinking water that took home the silver medal in the 2009 Berkeley Springs International Water Tasting Competition, Montrose is also seen as a wildlife corridor for a wide variety of BC wildlife such as black bears, wild turkeys, whitetail deer, and several different species of hummingbirds.

Located adjacent to the mouth of Kuskanax Creek, on the Upper Arrow Lake in the West Kootenay region of southeastern British Columbia, Nakusp is a small Village nestled between the Selkirk and Monashee mountain ranges.

Known for its restorative hot springs and picturesque mountain and lakeside views—Nakusp offers itself as the perfect place for those with a keen sense of adventure year-round. With a variety of different accommodations, shops, golf courses, camping, and access to the Summit Lake Ski Hill, there is a range of activities for anyone to enjoy.

The City of Nelson is nestled in the Selkirk Mountains on the West Arm of Kootenay Lake in British Columbia's Southern Interior. With a population of 10,664 and growing— Nelson provides the perfect small town vibe with big city amenities.

Boasting over 300-plus fully restored heritage homes, businesses and churches, and more restaurants and cafes per capita than San Francisco, Nelson is a meld of historic authenticity and upbeat cosmopolitanism.

Its sandy beaches, hotspring access, and short twenty minute drive from Whitewater Ski Resort makes it a year round favorite while the variety of job opportunities offered make it a desirable place for permanent residency.

Situated between the magnificent mountains of Kootenay National Park and the beautiful Columbia River Wetlands— The village of Radium and its some 1,339 residents is just an hour and a half drive away from Banff by way of Highway 93.

Named after the inconsequential traces of radon found in the hot spring waters, the Village boasts world class restaurants, a plethora of accommodation options suitable for any budget, and a variety of amenities that will satisfy your every need.

Located in the heart of the Kootenays, the Village of Salmo resides at the junction of the Crowsnest Highway and Highway 6, about a 30-minute drive from the neighboring towns of Castlegar, Nelson, and Trail.

Originally named after the salmon that were plentiful in the Salmo river, but whose stocks were depleted after dams were constructed along the Columbia River in the 1960s and 1970s.

The community is now known as the home of the Shambhala Music Festival which hosts upwards of 15,000 festival-goers every August. Additionally, the village is known for its wealth of outdoor activities such as fishing, biking, golfing, and skiing the Salmo Ski Hill.

Located approximately 30 kilometers from Fernie, the district municipality of Sparwood is the second-largest community on the Elk River.

Named after a railroad stop, the municipality of Sparwood was a logging town that shipped trees to coastal BC for manufacturing spars for ocean vessels. Today, it is known as the ‘town with the big green truck’, as it is home to the Terex Titan– one of the largest mining trucks in the world.

Steeped in a rich logging and mining history and lined with a plethora of parks and trails, Sparwood offers a variety of outdoor activities from extreme sports such as mountain biking and snowmobiling Elk Valley to fishing Michel Creek for cutthroat trout and whitefish.

Located in the West Kootenay region of the British Columbia Interior, the city of Trail is situated on both banks of the Columbia River between the Monashee and Selkirk Mountains.

With a long history as a pioneering industrial town, Trail has since morphed into a sports haven that was the home of a wealth of professional athletes.

Boasting its own regional airport, Trail is equipped with a variety of accommodations, restaurants, and shopping to suit every need.